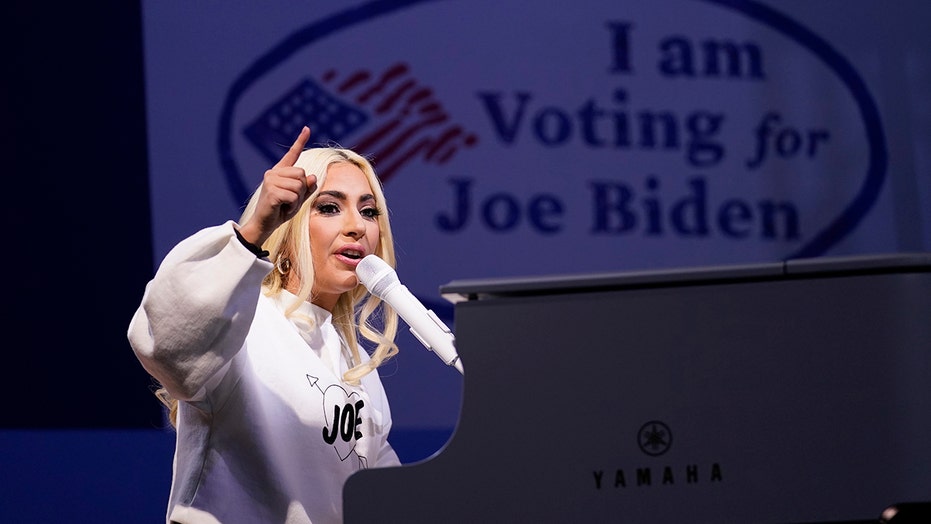 Lady Gaga defended herself against criticism she received for a pro-Biden campaign video that showed the singer seemingly mocking rural Americans ahead of the 2020 presidential election.

The pop star shared the controversial video over the weekend, just days before she was set to perform at the Democratic presidential nominee's Pennsylvania rally on Monday night.

In the video, Gaga is clad in camouflage but managed to show off some skin in a T-shirt knotted up to her chest, exposing her abs. She casually leaned against a black truck and said, “Hey, this is Lady Gaga, I’m voting for America, which means I’m voting for Joe Biden.”

The video shows her cracking a can of beer open, adding, “And if you live in Minnesota, Pennsylvania, Georgia, Michigan, Florida or Arizona, I encourage you to vote. And if you have a friend who lives there, tell them to vote.”

She completed the video by taking a big sip of the beer before smashing it on the ground in front of her.

Gaga made it clear she had no regrets in posting the video while speaking to the crowd at Biden's campaign rally on the eve of Election Day.

STARS WHO HAVE ENDORSED BIDEN FOR PRESIDENT

"I put some country clothes on the other day and said I was voting for Joe because I wear Cabela's [hunting gear] when I'm on a four-wheeler in Pennsylvania. And I will not be told what I can and cannot wear to endorse our future president," she told the crowd at Heinz Field in Pittsburgh, Penn. "So this is what I have to say about that...I may not always look like you. But I am you. We are each other."

At the drive-in rally, Gaga performed her hit "You and I" onstage donning a white sweatshirt that had Biden's first name inside of a heart. At one point during her appearance, the singer embraced Biden with a hug while wearing a rhinestone-encrusted black face mask that said "VOTE" on it.

The "Born This Way" singer's video is still up on her Twitter account, as are several photos and clips from her Monday night speech.

During her performance, Gaga shared an anti-Trump message with voters.

"Everybody, no matter how you idenitfy, now is your chance to vote against Donald Trump, a man who believes his fame gives him the right to grab one of your daughters or sisters or daughters or wives by any part of their bodies. Vote for Joe. He's a good person, thank you," she said.

Gaga's appearance in Pittsburgh drew groans from Trump campaign's communications director Tim Murtagh who tweeted on Sunday a lengthy statement in which he accused the singer of being anti-fracking, a core issue affecting voters in the state.

“Nothing exposes Biden’s disdain for the forgotten working men & women of PA like campaigning with anti-fracking activist Lady Gaga,” he wrote. “This desperate effort to drum up enthusiasm is actually a sharp stick in the eye for 600,000 Pennsylvanians who work in the fracking industry.”

Gaga responded to the jab and subtly implied that she’s not anti-fracking.

“HEY TIM HEY @realDonaldTrump SO HAPPY IM GLAD TO BE LIVING RENT FREE in your HEAD. #BidenHarris,” she wrote, sharing the statement with a few “vote Biden” stickers over it.

“#WINNING (also, what is fracking?) keep your jobs PA,” she wrote over the statement image.