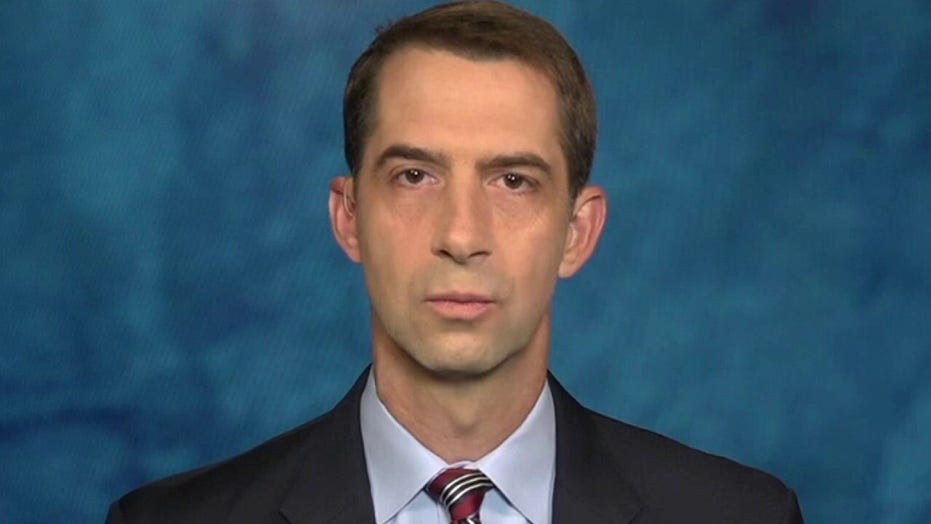 Sen. Cotton: We can not allow leaks to continue to happen in Congress

Another American city is smoldering because weak politicians failed in their most basic duty: protecting the lives and property of their citizens. Without strong action to restore order and deter criminals, the carnage will spread.

Riots erupted in Kenosha, Wis., last week following the police shooting of Jacob Blake. Police were responding to a domestic incident when they confronted Blake, the subject of a warrant for alleged sexual assault. While resisting arrest, according to police, Blake was shot seven times. His lawyer says he is now paralyzed.

After the shooting, rioters torched half a dozen buildings, including small businesses and a state corrections facility. Kenosha residents emerged the next morning to a hellscape of burned-out cars and looted stores.

They endured this anarchy with little support from the state’s Democratic politicians. To the contrary, these Democrats seemed afraid to upset the media and their party’s radical base, who downplay, excuse and even encourage violence when it serves their cause.

A man on a bike rides past a city truck on fire outside the Kenosha County Courthouse in Kenosha, Wisconsin, U.S., during protests following the police shooting of Black man Jacob Blake August 23, 2020. Picture taken August 23, 2020. Mike De Sisti/Milwaukee Journal Sentinel via USA TODAY via REUTERS.

Wisconsin’s Democratic governor, Tony Evers, failed to deploy the National Guard until the first wave of looting and arson had torn through Kenosha. But in the critical hours before the riots began, Evers released an incendiary statement about police “mercilessly" killing Black Americans and the “racism in our state and our country,” presumably without knowing all the facts and circumstances of Blake’s arrest.

Even after the Guard was called in, Evers didn’t do enough to bring the rioting under control. He turned down an offer of federal assistance on Tuesday, mere hours before a melee in the street resulted in the shooting deaths of two persons. When the Kenosha County Board requested 1,500 Guard members to restore order after the shooting, Evers responded – by authorizing one-third that number. The feckless and overmatched Evers finally accepted help from President Trump the same day.

Meanwhile, another wave of riots erupted around the same time in Minneapolis, the city that touched off a national conflagration in May after the death of George Floyd while in police custody. The latest riots broke out because of a false rumor that the police had killed a local man suspected of murder. In reality, he had committed suicide.

But the mob doesn’t deal in nuance. Rioters and looters rampaged through a downtown mall, smashed storefronts and set fires. The employees at a liquor store were forced to hide in the beer cooler as looters smashed in windows. A rioter struck a police officer in the head with a garbage-can lid – while anarchists cheered.

Minneapolis’s most recent descent into disorder should come as no surprise, as local Democratic politicians had done everything possible to demoralize and dismantle the Minneapolis Police Department the past few months. In June, a veto-proof majority of the city council voted to defund the police department. The same day as the riots, the town’s Democratic mayor, Jacob Frey, unveiled a policy to make it harder for police to use force when subduing criminals.

America’s streets have exploded into battlegrounds yet again. The carnage will continue until mayors and governors get tough and allow the police to do their job. A return to normalcy won’t come through weakness and passivity, but only by a decisive and overwhelming show of force that convinces these anarchists they can’t blackmail and burn America into submission.

In June, I offered the same advice in a New York Times op-ed, arguing that the National Guard and federal troops, if necessary, ought to be deployed to cities where law and order had broken down. I said that if strong action wasn’t taken to deter future rioters, the forces of anarchy and destruction would be emboldened.

My op-ed sparked a newsroom revolt at the New York Times. Liberal critics dismissed as dangerous or even fascistic my suggestion that a strong show of force could deter chaos. These critics confidently noted that the riots in New York City, St. Louis and elsewhere burned out after several days – partly because local leaders finally allowed law enforcement to do its job, partly because there was nothing left to loot or ransack. See? they crowed, the problem took care of itself.

But of course, they were wrong. The chaos and destruction spread to different towns like a wildfire.

Americans watched in horror this summer as armed anarchists took over entire city blocks in Seattle, violent mobs besieged government buildings in Portland, and looters in Chicago forced the mayor to cut off access to downtown to prevent further destruction. This season of chaos and lawlessness has contributed to a double-digit spike in the murder rate in the nation's largest cities. Hundreds of Americans have been killed as a result.

Now chaos continues in places like Portland, where one man was killed in a clash between Trump supporters and protesters this weekend, and is spreading to smaller towns like Kenosha. Months into this crisis, the lesson to any responsible leader is clear: take action quickly to maintain order, otherwise anarchists and insurrections will be emboldened to destroy your city and move on to the next one.

Last week, Kenosha and Minneapolis were the unlucky cities. Next week, it could be your home town.