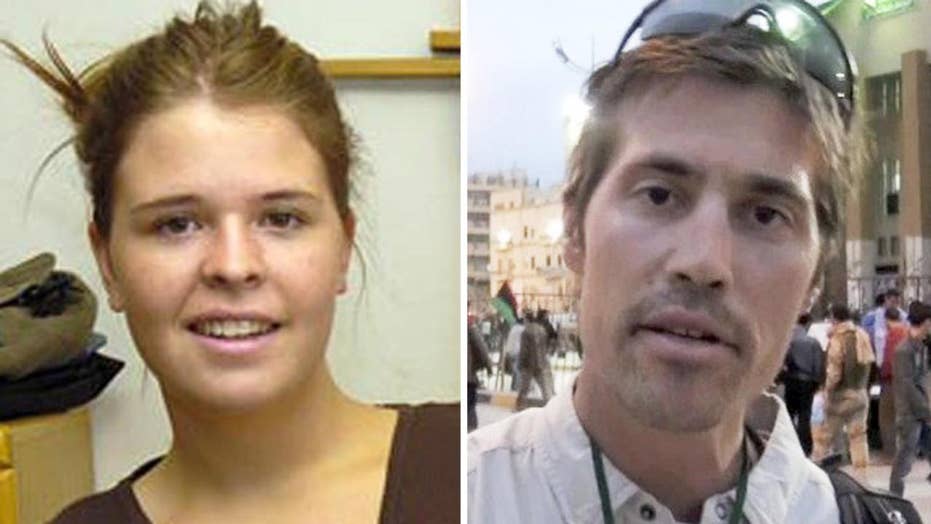 Mueller and Foley families open up on 'Fox &amp; Friends' after death of ISIS leader

The parents of slain ISIS hostages Kayla Mueller and James Foley speak out after the raid that led to the death of Abu Bakr al-Baghdadi.

Carl and Marsha Mueller — parents of aid worker Kayla Mueller, who was reported dead in 2015 after being abused by Islamic State militants — will be speaking Thursday at the Republican National Convention.

ISIS fighters reportedly abducted Kayla Mueller, who was 26 at the time, and her boyfriend in 2013 after they left a Doctors Without Borders hospital in Aleppo, Syria. Militants claimed a Jordanian airstrike killed Mueller in 2015, according to The New York Times, but her body was never discovered.

The Muellers are a Christian family and raised Kayla in Arizona, where they currently reside.

"We worried about Kayla. We worried about the burden of what she was witnessing. And we worried about her safety," the Muellers said at a 2016 event organized by the Permanent Observer Mission of the Holy See to the U.N. "In the spring of 2013 as things in Syria were getting worse, I asked Kayla to come home. I told her this was not her war and not her people and she did not need to die for it."

The parents, both retired, believe their daughter would be there with them if the Obama administration had been as decisive at the Trump administration, they said in an Oct. 29 interview with The Arizona Republic.

"I still say Kayla should be here, and if Obama had been as decisive as President Trump, maybe she would have been," Marsha Mueller told the outlet. "For me, what matters most, I’m hoping now we will finally get the answers we have been asking for all along. I think this administration truly might help us. I don’t think they are as closed about what happened."

Trump on Oct. 27 announced that Mueller's captor, ISIS leader and founder Abu Bakr al-Baghdadi, blew himself up as U.S. special forces raided the compound where he was hiding.

In an Oct. 27 interview with ABC News, the Muellers said they went "against the advice of the FBI" in May 2015 and met with Umm Sayyaf, the wife of an ISIS militant, who helped keep the 26-year-old captive in her home for al-Baghdadi to sexually assault, ABC reported at the time.

"When we talked to Umm Sayyaf, we found we got more information out of her, not just us, the people backing us — they got information from her that neither the Kurds or the U.S. government had got in the two days that we were there," Carl Mueller said.

He added that it "makes a big difference when you are talking to these people with a humanitarian attitude," saying they only inquired about how to bring their daughter home when they spoke to Sayyaf.