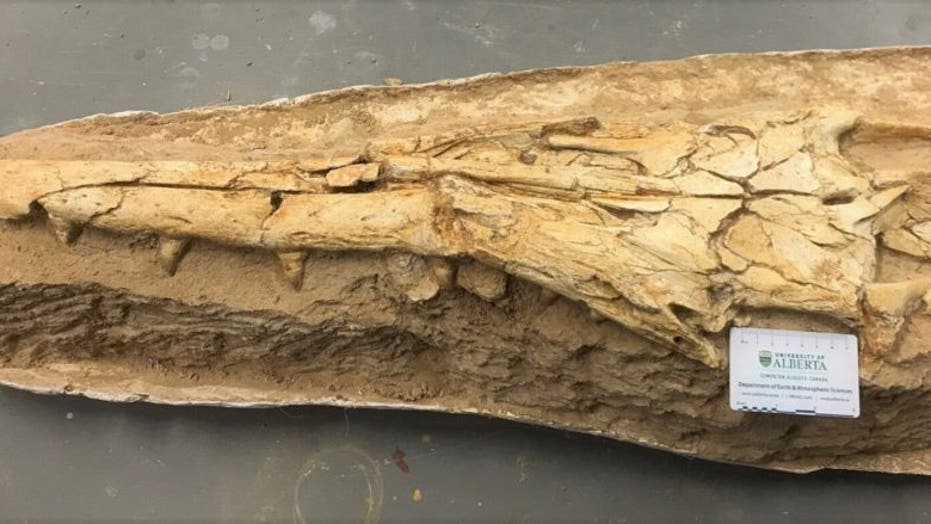 Researchers have discovered a new species of mosasaur, a terrifying prehistoric reptile that lived during the age of dinosaurs, in Morocco.

Known as Gavialimimus almaghribensis, the new species had a "narrow, highly elongate snout and interlocking teeth" reminiscent of relatives of crocodiles, the experts wrote in the study, published in the Journal of Systematic Paleontology.

“Its long snout reflects that this mosasaur was likely adapted to a specific form of predation, or niche partitioning, within this larger ecosystem," the study's lead author, Catie Strong, a graduate researcher at the University of Alberta in Canada, said in a statement.

The fossilized skull of the newly identified mosasaur features a long, narrow snout and interlocking teeth, which suggest it adapted to hunt particular prey in a highly competitive ecosystem. (Catie Strong)

Like other mosasaurs, G. almaghribensis lived during the Late Cretaceous period, which took place between 72 million and 66 million years ago.

It's unclear how large G. almaghribensis grew, but the experts were able to identify the new species of apex predator by its skull, which is 3 feet long, as well as isolated bones. Other variants of mosasaur could reach up to 50 feet in length and are thought to have weighed as much as 30,000 pounds, with some referring to them as the "T. rex of the seas."

Strong added that each species of mosasaur adapted to their different prey or different style of hunting, helping to explain the differences seen in the fossils.

“For some species, these adaptations can be very prominent, such as the extremely long snout and the interlocking teeth in Gavialimimus, which we hypothesized as helping it to catch rapidly moving prey,” she added.

66 MILLION-YEAR-OLD SEA MONSTER HAD UNFAIR ADVANTAGE: IT 'SWAM UNLIKE ANYTHING ELSE'

Another species of mosasaur, Globidens simplex, had round teeth capable of crushing shelled animals.

“Not all of the adaptations in these dozen or so species are this dramatic, and in some cases there may have been some overlap in prey items, but overall there is evidence that there's been diversification of these species into different niches,” Strong explained.

In December 2018, the fossil of a 180-million-year-old "sea monster" from the Jurassic era was discovered with evidence of blubber and skin, making the creature more similar to modern-day dolphins than previously thought.

The fossil of an 85-million-year-old mosasaur was discovered in Kansas in October 2018.