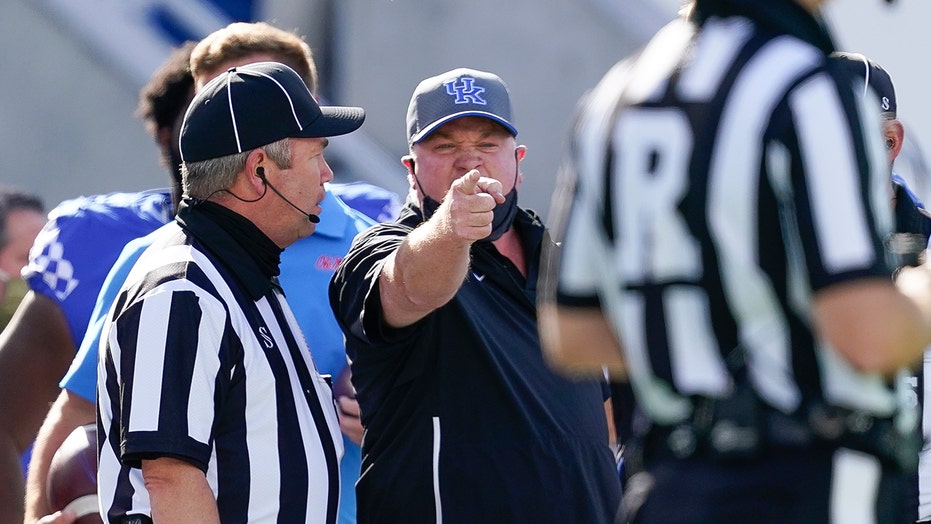 Kelvin Joseph and Jami Davis returned interceptions for touchdowns in the first half and Kentucky shut out No. 18 Tennessee in the second half to bury the Volunteers 34-7 Saturday.

It was Kentucky's first win in Neyland Stadium since 1984, the Wildcats' largest margin of victory in Knoxville since 56-0 in 1893 and their most lopsided victory in the series since 1935.

After getting six interceptions and allowing only a safety against Mississippi State last week, Kentucky (2-2) picked off three passes against the Vols (2-2).

Tennessee has now followed up an eight-game winning streak with a two-game losing streak.

Joseph's 41-yard touchdown and Davis' 85-yard return — both off interceptions thrown by Jarrett Guarantano — helped put Kentucky up 17-0 in the second quarter.

With about 5 minutes left in the third quarter and trailing by 20, Tennessee went three-and-out for a second consecutive possession and was showered with boos from the sparse crowd of 22,519.

Earlier in the season, Kentucky had shown signs of having difficulty recovering from adversity. Against Ole Miss, a missed field goal was followed by 21 straight Ole Miss points and a 42-41 loss.

Kentucky seemed to solve that Saturday.

After falling behind 17-0 in the second quarter, Tennessee was able to grind out a 75-yard drive to cut the deficit to 10 at the half.

The Vols had the first possession of the third quarter, but went three-and-out. The Wildcats' offense responded with a 76-yard march that ended in a 1-yard TD pass from Terry Wilson to Allen Dailey, Jr.

Chris Rodriguez had a 2-yard touchdown run in the fourth quarter to stretch the Kentucky lead to 34-7.

Four Tennessee turnovers — three interceptions and a fumble — dictated the first half.

Kentucky: The Wildcats ended a streak of 17-straight losses at Neyland, which was the longest such streak in major college football. Temple has lost 15 straight at Penn State was No. 2.

Tennessee: Guarantano was benched after two picks and J.T. Shrout was intercepted on his first attempt by Tyrell Ajian. That pick was turned into a field goal and a 17-0 lead.

Guarantano’s performance off the bench in last year’s 17-13 win at Kentucky fueled his resurgence. That carried him through the final three games of last season and the start of this season.

But it’s apparent that Tennessee again has a questions at quarterback.

Kentucky will face No. 3 Georgia at home Saturday night.

Tennessee will entertain No. 2 Alabama Saturday.