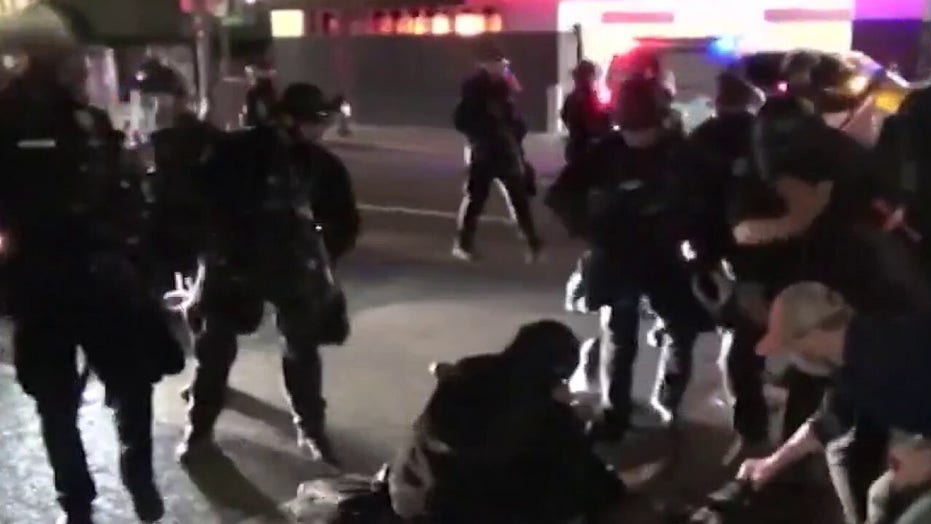 Police are investigating the shooting death of a protester in Portland; Matt Finn reports.

The sheriffs of Clackamas and Washington County in Oregon said they won't send staff to help with the nightly unrest in Portland after Gov. Kate Brown unveiled a plan to bring an end to violence in the city.

Brown had asked the sheriffs and the Gresham Police Department to support the Portland Police Bureau with personnel and resources "to keep the peace and protect free speech."

Clackamas County Sheriff Craig Roberts on Monday said the governor never approached him before unveiling her plan to mobilize local law enforcement agencies in the Portland protests, and that he has no plans to send his staff to nightly demonstrations.

“Had Governor Brown discussed her plan with my office, I would have told her it’s about changing policy, not adding resources,” he said, according to a statement released by Kellee Azar, a reporter with Portland's KATU. “Increasing law enforcement resources in Portland will not solve the nightly violence and now, murder.”

He said that Portland’s newly elected district attorney had dismissed charges against hundreds of protesters arrested for non-violent, low-level crimes.

“The same offenders are arrested night after night, only to be released by the court and not charged with a crime by the DA’s Office. The next night they are back at it, endangering the lives of law enforcement and the community all over again,” Roberts continued. “The criminal justice system will need do its part and hold offenders accountable.”

The sheriff added that his staff would still assist Oregon State Police with service calls that they normally handle in Clackamas County.

Under the six-point plan unveiled on Sunday, Brown said the nearly 100 days of protests have stretched the Portland Police Bureau’s resources thin.

Portland police officers push protesters past a dumpster fire during a dispersal from in front of the Immigration and Customs Enforcement (ICE) detention facility in the early morning on August 21, 2020 in Portland, Oregon. (Photo by Nathan Howard/Getty Images)

She argued that additional local and state personnel, as well as federal resources, will give the Police Bureau "the investigative capacity to arrest and charge those individuals who have engaged in violent or destructive acts and endangered public safety."

It was unveiled after a man was fatally shot amid clashes between supporters of President Trump and Black Lives Matter protesters.

"I do not plan to send deputies to work directly in Portland," Garrett said, according to the station. “The lack of political support for public safety, the uncertain legal landscape, the current volatility combined with intense scrutiny on use of force presents an unacceptable risk if deputies were deployed directly."

A Gresham police spokesperson told The Oregonian, “We are in agreement with the other agencies.”

Meanwhile, the Oregon Association Chiefs of Police released a statement on Monday, saying "we cannot dedicate our limited resources away from the communities we serve," according to KATU.

After the statement by Sheriff Roberts was released, Brown's office told the station the plan is "meant to allow for this kind of flexibility in supporting each other as we all collectively deal with the difficult situation in Portland."