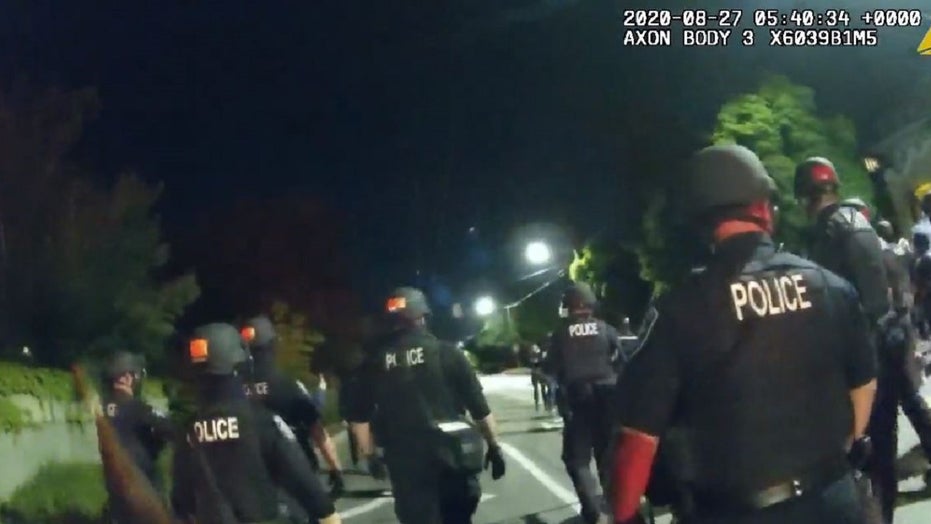 The footage -- which runs nearly four hours -- is part of a federal lawsuit against the city by Black Lives Matter activists and the American Civil Liberties Union that alleges the Seattle Police Department violated a judge's order regarding the use of crowd control-tactics, a police spokesman told Fox News.

The videos are from Aug. 26, Sept. 2, Sept. 22, and Sept. 23. The footage is part of the city's defense to show that officers did not violate the court order. The videos show officers and protesters clashing as authorities attempt to disperse crowds.

Seattle police officers attempt to disperse a crowd during an August demonstration. (City of Seattle)

The department came under scrutiny for its response to demonstrations over the summer that saw what some perceived to be heavy-handed responses to otherwise peaceful gatherings. In July, a federal judge temporarily ordered Seattle police to halt the use of tear gas on peaceful protesters.

In some of the newly released footage, protesters are seen launching fireworks, throwing bottles and other objects, and shining lasers at officers. Some also physically attacked officers.

In other parts, officers are seen using tactics that include throwing blast balls into crowds and pushing protesters.

During the Aug. 26 demonstration, officers in tactical gear are seen moving toward a group of protesters in an effort to disperse the crowd.

"Hold the line," one officer is heard screaming as cops physically engage with protesters.

Protesters fell over one another as officers pushed them out the way. Some used parked cars to shield themselves, but authorities said the gathering impeded traffic in the area.

The demonstration was initially held as a candlelight vigil for a woman killed by a wrong-way driver.

Seattle police officers move back a crowd during a Sept. 7 protest.聽 (City of Seattle)

The Seattle Police Department declined to comment on the footage, citing pending litigation.

Oral arguments in the case are expected to begin next week, KOMO News reported.