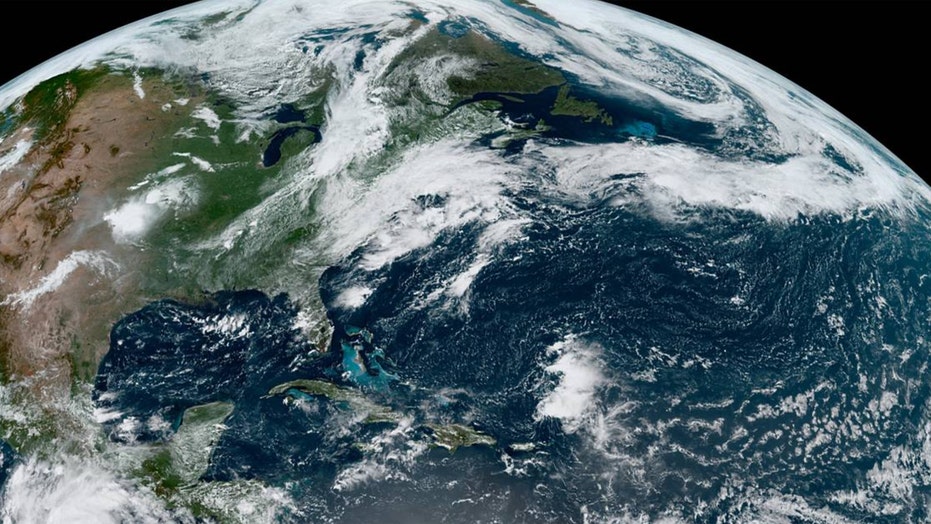 Rick Reichmuth has your FoxCast.

The latest two tropical systems that broke more records for the 2020 Atlantic hurricane season both weakened on Sunday, according to forecasters.

The U.S. National Hurricane Center in Miami said Sunday that Tropical Storm Josephine's maximum sustained winds decreased to around 35 mph, and the system was now a tropical depression.

The storm system is located about 195 miles northwest of the Northern Leeward Islands and is moving west-northwest at 13 mph.

The NHC said in its 11 a.m. ET advisory that Josephine could become a remnant low or dissipate by Monday.

Josephine can be seen swirling north of the Leeward Islands, and Kyle moves into the Atlantic. (NOAA/GOES-East)

"Josephine continues to lose organization as it passes to the north of the Virgin Islands," the NHC said.

Josephine was forecast to bring 1 to 3 inches of rain to parts of the northern Leeward Islands, the Virgin Islands and Puerto Rico. No coastal watches or warnings were in effect.

Kyle, now a post-tropical storm, was far off the East Coast of the continental U.S. — centered about 545 miles southwest of Cape Race, Newfoundland, Canada. The system was expected to fizzle out by Monday night.

Stormy conditions on the horizon for 2020 Atlantic Hurricane season

So far this year, Cristobal, Danielle, Edouard, Fay, Gonzalo, Hanna, Isaias, Josephine and Kyle have set records for being the earliest named Atlantic storms of their respective place in the alphabet. Only Hanna and Isaias this year have developed into hurricanes.

Before Kyle, the earliest “K-named” storm was Katrina, which formed Aug. 24, 2005, according to Colorado State University hurricane researcher Phil Klotzbach.

Forecasters now have their eyes on other areas of potential development in the Atlantic.

That's far above an average year. Based on 1981 to 2010 data, that is 12 named storms, six hurricanes, and three major hurricanes.

The names for the 2020 Atlantic hurricane season. (Fox News)

The most active stretch of the hurricane season is from late August to early October when most storms and major hurricanes are seen.

Fox News' Julia Musto and the Associated Press contributed to this report.